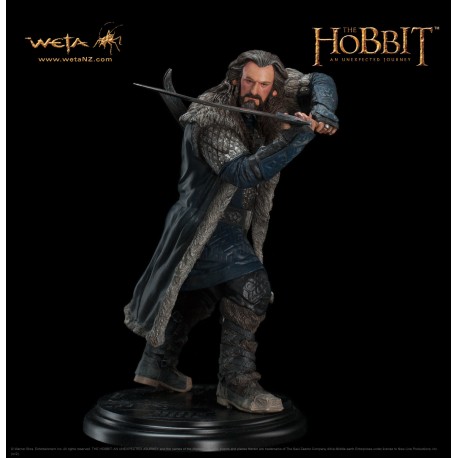 A proud and noble Dwarf of resolute character and stern bearing, Thorin Oakenshield™ is the grandson of Thror of the line of Durin and heir to lost throne of Erebor.

Alongside Moria, Erebor stood as the greatest of the realms of the Dwarves, a vast kingdom carved from the living rock of The Lonely Mountain, bustling with trade and bursting with wealth. Down upon Erebor the great dragon Smaug™ had fallen and the city and its people were engulfed by the inferno of his coming. Thorin Oakenshield and his kin were fortunate to escape with their lives, though they left everything else behind. Their treasure and pride was swept up by the dragon into a pile upon which he curled to sleep, deep inside the mountain.

Throughout the long, hard decades of his exile, Thorin Oakenshield’s mind ever dwelled upon the thought of some day retaking the mountain and restoring his people to their erstwhile splendour. In time he would form a company of Dwarves, thirteen in number and at the Wizard Gandalf’s insistence, reluctantly employ the services of the Hobbit Bilbo Baggins, setting out for The Lonely Mountain with dreams of gold and glory.

Beset by enemies and misfortune, Thorin Oakenshield and his party would lose much along the way, but one prize the grim-faced Dwarf was pleased to lay hands upon early in his journey was the mighty sword, Orcrist™, a famous blade of Elven make and well suited to be carried by a king, if one yet in want of a kingdom.