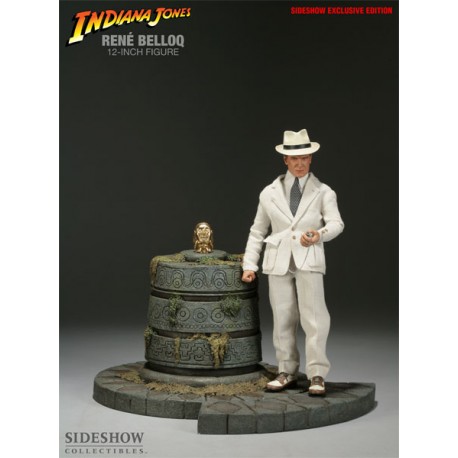 1936 - South American Jungle. Dr. Indiana Jones narrowly escapes the deathly booby traps that guard an ancient fertility idol. Indy emerges from the idol's cave, only to be met by his old rival Rene Belloq, surrounded by natives with poisoned darts. Indy hands the idol over to Belloq and is quickly on his way home. Empty handed, Indy returns to Marshal College and his post as a professor of archeology. When his old friend Marcus Brody and the US Government discover a Nazi excavation in Egypt, they pay a visit to Dr. Jones to find out what the Nazis seek.

Indiana Jones quickly realizes that the Nazis, aided by Belloq, have discovered the ancient city of Tanis, the resting place for the Ark of the Covenant. The Ark is said to house the Ten Commandments and grant incredible power to the one who can open it, allowing the Nazis to destroy vast stretches of the world. To find the Ark before the Nazis, Indy must retrieve the medallion headpiece of the Staff of Ra from his old girlfriend Marion Ravenwood, unaware that Nazi agent Toht is following close behind. The two men cross path in a fiery brawl that leaves one side of the medallion's carvings burned into Toht's palm, the medallion safe with Marion. Traveling to Egypt, Marion and Indy seek the help of an old friend, while Belloq attempts to read Toht's injury as a map to the Ark.

After translating the medallion's carvings, Indiana Jones and Egyptian excavator Sallah discover the Ark's true resting place. They begin to dig, knowing that without both sides of the medallion, the Nazis are searching the wrong location, but it doesn't take long for Belloq to realize the missing pieces of the medallion's puzzle. The Ark of the Covenant unearthed and the Nazi's in close pursuit, a struggle begins that would ultimately land the relic and Marion in the wrong hands. Indy closes in on Marion and the Ark, only to be captured himself. In their rush to unleash the relic's incredible power, Belloq and the Nazis have forgotten the Ark's sacred requirements and soon find out the weight of their impatience.

What's in the Box?