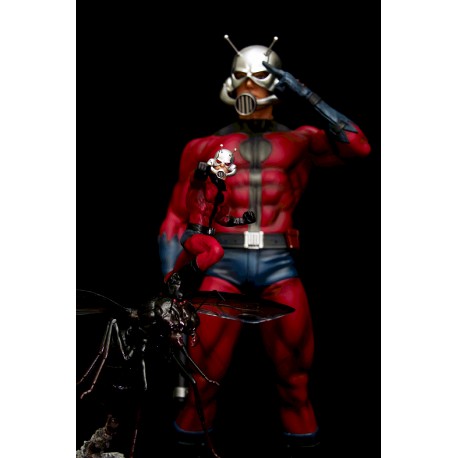 XM Studios is proud to present our next Marvel Premium Collectibles statue series, Ant-Man. One of the very first members of Avengers, the versatile hero is captured in the form of highly detailed 1:4 scale cold-cast porcelain, each painstakingly handcrafted statue stands at approximately 19 inches tall. Every statue is individually hand-painted with the highest possible quality finish. Featuring a mini sized Ant-Man commanding an army of mutant ants, be sure to keep your candies away from this statue!

Biophysicist and Security Operations Center expert Dr. Henry Hank  Pym decided to become a superhero after discovering a chemical substance (Pym Particles) that would allow the user to alter his size. Armed with a helmet that could control ants, Pym would shrink down to the size of an insect to become the mystery-solving Ant-Man. He soon shared his discovery with his girlfriend, Janet Van Dyne, who became his crime-fighting partner as the Wasp. The duo would become founding members of the Avengers, fighting recurring enemies such as the mad scientist Egghead, the mutant Whirlwind, and Pym's own robotic creation Ultron.