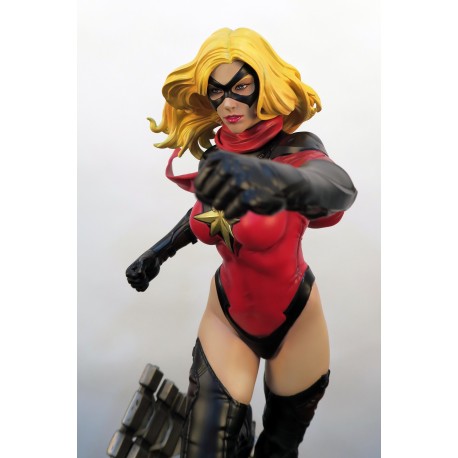 XM Studios is proud to present the Marvelous Female Powerhouse, Ms Marvel! One of the strongest Heroines in the Marvel Universe, her beauty and power is brought to life in an incredibly detailed 1:4 scale cold-cast porcelain format. Each painstakingly handcrafted statue stands at approximately 22 inches tall and every piece individually hand-painted with the highest possible finish. In an action pose bursting out of a battle-ravaged tank debris which is designed to go well with our upcoming She-Hulk, you can also switch between Classic Crop or Luscious Long Golden Locks for the Ms Marvel look you prefer!

Carol Danvers is a Major in the United States Air Force who worked alongside Dr. Philip Lawson in a special satellite base in Colorado. After an attack by a 459 Sentry, Lawson revealed himself to be a Kree warrior/scientist known as Mar-Vell. During the battle, an explosion caught both Marvel and Danvers in the middle, causing Danvers to be exposed by the cosmic energy flowing around Mar-Vell, imbuing her with cosmic powers from the exposure. Following her recovery, Carol becomes Ms. Marvel and later second-in-command to the S.H.I.E.L.D. Extra-Terrestrial Division known as S.W.O.R.D.