> THE HOBBIT>The Hobbit: The Desolation of Smaug Smaug - King Under the Mountain 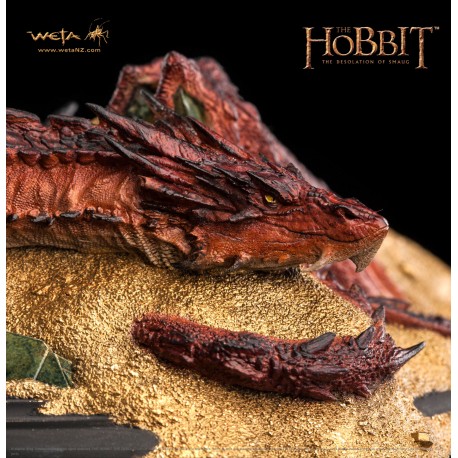 The Hobbit: The Desolation of Smaug Smaug - King Under the Mountain

SMAUG - KING UNDER THE MOUNTAIN

SMAUG - KING UNDER THE MOUNTAIN

Coiled beneath a quilt of innumerable glittering coins and stolen treasures, the mighty Smaug™ slumbers, dreaming of gold.

The Dwarven city of Erebor was no match for a fire drake and was taken in a storm of death and flame lasting mere moments.

The Dragon has resided within the carved walls of stone, supreme and unchallenged in his dominion; the true King Under the Mountain.

Yet peerless as Smaug is in size and power, doubt and jealous suspicion gnaw at him in his dreams and stir the Dragon from his slumber. Out there in the wide world the heir of Durin walks still, sworn to reclaim his lost crown and kingdom. Rumour of untold riches might yet attract foolhardy and unwanted guests, and the wretched Men of Lake-town dwell nearly upon the Dragon’s doorstep. Stirring to cast a smouldering eye across his hoard, the thought of thieves and interlopers kindles a fiery rage in the Wyrm’s belly.