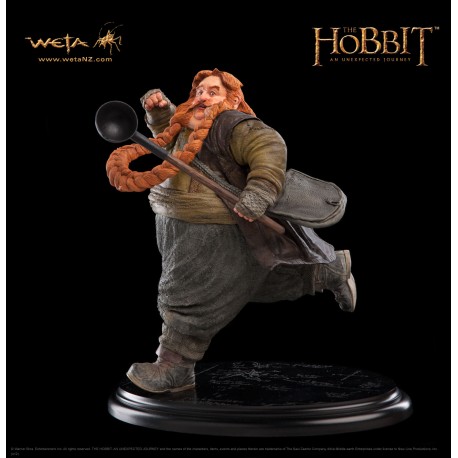 The Hobbit: An Unexpected Journey Bombur the Dwarf

Brother of Bofur and cousin to Bifur, Bombur rounds out the Company of Thorin as the Quest's travelling cook.

Broad even for a Dwarf, who as a people tend to be stocky and wide of belly, Bombur has a passion for the preparation and consumption of food. But there is far more to the roly-poly Dwarf than just an appetite and predilection for culinary adventuring.

Bombur may be somewhat innocent in the ways of the world and not as well travelled or experienced as some of his older companions, nor has he ever seen the object of the Quest: the Lonely Mountain they seek to reclaim. But he is brave, doughty and as loyal as he is capable with his ladle, a surprisingly effective weapon when swung like a hammer. A strong and dauntless fighter when pressed, the young Dwarf soon finds he can take care of himself when it most matters, and can put on a surprising turn of speed, but then Dwarves are natural sprinters.