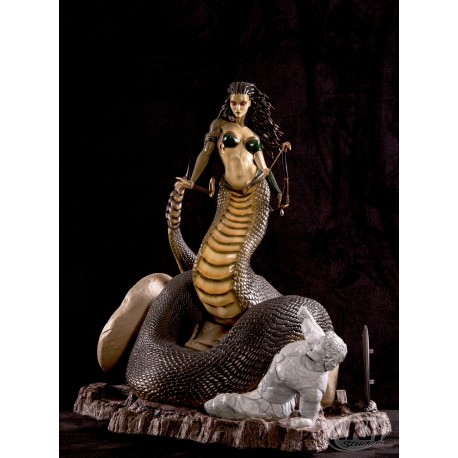 Medusa was a monster, one of the Gorgon sisters and daughter of Phorkys and Keto, the children of Gaea  and Oceanus. She had the face of a woman with snakes instead of hair; anyone who looked into her eyes was immediately turned to stone. Her sisters were Sthenno and Euryale, but Medusa was the only mortal of the three.

She was originally a golden-haired and extremely beautiful woman, who, as a priestess of Athena, was devoted to a life of celibacy; however, after being raped by Poseidon, she was punished by the goddess in a most terrible manner. Each wavy lock of the beautiful hair that had charmed her husband was changed into a venomous snake; her once gentle, love-inspiring eyes turned into blood-shot, furious orbs, which excited fear and disgust in the mind of the onlooker; whilst her former roseate hue and milk-white skin assumed a loathsome greenish tinge.

Seeing herself transformed into such a repulsive creature, Medusa fled her home, never to return. Wandering about, abhorred, dreaded, and shunned by the rest of the world, she turned into a character worthy of her outer appearance. With the curse of Athena upon her, she turned into stone whomever she gazed upon, till at last, after a life of nameless misery, deliverance came to her in the shape of death, at the hands of Perseus.