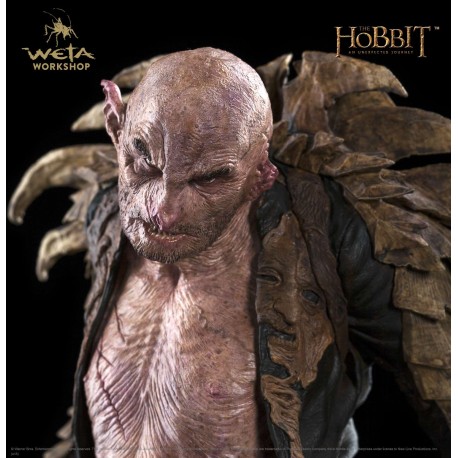 The third Orc to join the ranks of statues from The Hobbit motion picture trilogy is the formidable Yazneg.

A snivelling lieutenant in service to the great Orc chief Azog, Yazneg leads a band of Warg-riding hunters through the wilds of Rhudaur in search of Thorin Oakenshield. Armed with a vicious barbed spear and spurred as much by fear of incurring his master's wrath as his kind's innate enmity for the Dwarves, Yazneg spurs his mount and snarls raspy commands to his fellow hunters as they bear down on the Company of Thorin.

Unfortunately for Yazneg, the intervention of Elrond's Rivendell cavalry sees his pursuit cut short and his quarry escape. Having been outmatched by the Elves and lost most of his troop, he retreats to Weathertop to answer to Azog for his loss. A lesser breed of Orc, Yazneg is no match for the giant of Gundabad. Returning empty-clawed from his hunt, he scrapes and crawls before his master. It will be the last time he fails the Pale Orc.