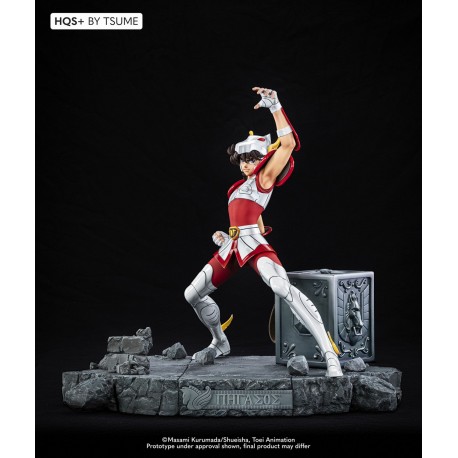 Protagonist of Saint Seiya as well as one mythical Bronze Saint in the service of the Goddess of Wisdom: here comes Pegasus HQS+ by Tsume!

After six long years of training at the Sanctuary under the direction of Eagle Marin, the young rebel faced a dozen opponents in order to win the Pegasus Cloth. After nine victories, he won his tenth fight, against Cassios, the disciple of Ophiuchus Shaina, thanks to Pegasus Ryūsei Ken, demonstrating his mastery in Cosmo! This is how Seiya became the new Pegasus Bronze Saint ...

We see him here in his first position when putting on his Pegasus Cloth, leaning on his bent right leg, with his left arm raised and his right fist closed. He also has interchangeable arms showing him deploying his Cosmo energy in translucent blue resin**. The Bronze Saint wears his varnished metallic red cloth with silver gray and yellow metal protections belted at the waist, covering his legs, forearms, shoulders and especially his heart. Adorned with light reflections, his cloth contrasts with his matt complexion as well as his brown hair covered by his helmet. The hairlocks escaping fail to mask the rebellious gaze and the determined expression of the reckless Saint.

Behind Seiya's left leg is the mettalic grey Pegasus Pandora’s Box, as shown by the head of the winged horse as well as the straps in imitation leather allowing him to carry the box. The emblems on the other walls of the box refer to chivalry and cosmos. In front of the legs of the Bronze Saint are either his Cosmo energy in translucent blue resin, or rock clusters, both interchangeable. Looking at the ground of Athena’s sanctuary, we can see the Pegasus constellation engraved in stone, while we find at the front of the base the emblem of the creature as well as its name written in ancient Greek as on antic temples. The front of the plinth is interchangeable, allowing the Pegasus' plate to appear or not on the stone floor.

Bronze Saint is intended to take place in front of the diorama of the HQS + statue of Athena, if desired, that is why it comes with a staircase allowing him to access the temple located behind him. Thereby, he is ready to defend the Goddess of War and Justice, great Protector of the Sanctuary!

The statue comes with a numbered plate and a certificate of authenticity.